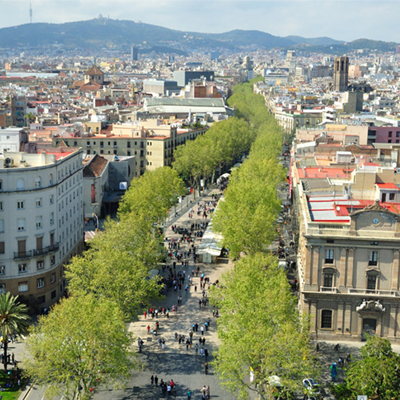 Las Ramblas, the most important promenade of Barcelona 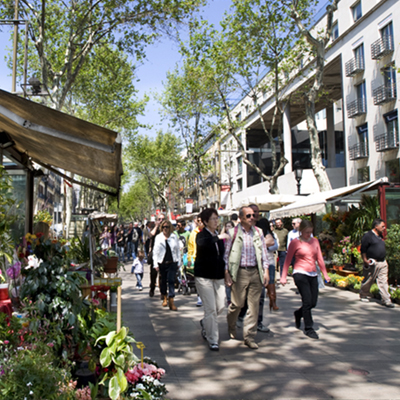 Raval neighborhood, one of the most emblematic districts of Barcelona

Plaça Reial, one of the most lively plazas of Barcelona

Barcelona is a magical and international city, not only due to its flamenco Barcelona tradition. History, cuisine, culture, leisure, beach, fashion ... cultural richness makes it a cosmopolitan city and the entertainment options are endless. Tablao Cordobes Flamenco Barcelona is located in the historical centre of Barcelona, in the middle of Las Ramblas, the most important promenade of Barcelona that goes through the city like an green artery surrounded by little streets that ramify all over Ciutat Vella (Old City) district. The leafy banana trees, brought from Gerona in the XIX century, are in charge of roofing the promenade with their star shape leafs. Their trunks also frame this original and emblematic street. Every day thousands of people from every country and culture walk through this promenade, they all create a colorful image that reflects the cosmopolitan attitude of the city.

If you position yourself in Las Ramblas, looking at the sea, at your right you will find "El Raval". Raval is a neighborhood of Barcelona, located into the district of Ciutat Vella (old city), it was born when the walls of the medieval city were extended. It is demarcated by Poble Sec district, through Paralel Avenue; with Saint Antoni and through Pelayo Street and La Rambla. Among its streets, we want to emphasize Carmen Street, Nou de la Ramblas Street and the Rambla of Raval. Nowadays, raval is populated by people from many countries and cultures. In its streets you can see establishments of every nationalities and even fashion and new tendencies shop, even more in the upper side.

Back again in Las Ramblas, now turn left and you will find yourself within "El Barri Gòtic". It is the historical center of the city and in its streets you can see a big commercial activity with many crowded shops and establishments. Penetrating deep into the historical chore of a city like Barcelona allows you to discover the remains of the old Barcino, founded by the Romans 2000 years ago and one of the most magnificent cities of Europe during the medieval age.

Let yourself roam through this magical and never ending city. There is so much to see!